It seems I’ve gotten yet another holiday season under my belt. My “holidays” run from Thanksgiving through my birthday. If I can be completely honest, I feel as if I’ve been spanked; yes, spanked. In many ways it was as hard as the first.

And, that caught me by surprise.

But apparently, it’s “normal” for some years to be harder than others. “Normal”…yeh, there’s nothing “normal” about the holidays for this worn-down, weary widow.

Weary. I had myself a weary little Christmas, weary little holidays, weary birthday. I’ve been asked for the last several weeks how my holidays were. I answered quickly, “they were okay, they were quiet.” Apparently, that’s not normal things to call holidays either. Sigh.

I finally feel like I’m digging out. I am glad to be in a new year…to good ol’ 2013. But I can’t fully embrace a new year without taking time to reflect on 2012…and my word for last year…

I started 2012 with a new song that quickly became one of my favorites, Passion’s “White Flag.” Singing it always brought images of my hands lifted high, holding a white banner, eyes lifted to heaven, freely giving myself to my Great God. Surrender.

When I chose the word release, I had no idea what that really meant I would surrender this year.

I let go of two big things tied to Tony. One was his Accord that I’d been driving. It was the same car Tony picked me up in on our first date, the car we rode away in on our wedding night. It carried a lot of memories, yet, it was needing more maintenance than this non-car dealing widow could handle. Plus, after experiencing first hand my friend totaling her car last January, I just could not bear the thought of something happening to Tony’s car. I wanted to choose to let go. Last April, I drove it to the dealership; I drove away in a new white car, with his blue car in my rearview mirror. Release. 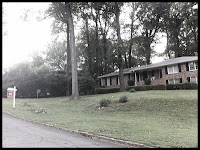 The second was our fixer-upper house we had bought just 2 months before Tony’s fall. It quickly became the old ball-n-chain. No offense to my husband, but that house needed all of both of us to keep it afloat. The things I had to deal with over the last 2 and a half years, you just can’t make that stuff up. It was put on the market in early August and sold in early October. Only God. I drove by one last time a couple days before closing; the phrase that came to mind was “shattered dream.” Still, I felt a huge sense of relief and release of a burden. No regrets. Release.

In the midst of these 2 milestones, I began a program through our church called “Hope.” It’s one on one mentoring that led me through a process of rediscovering and redefining my identity in Christ. I had no idea how life-changing it would be. It’s as if I came to the “other side” of my grief and to the end of myself. I was finally willing to deal with ME, my insecurities, my false beliefs that spring up when I’m trying to operate apart from Christ. It was ugly, sure, for these beliefs have been ingrained for decades. It’s a work in progress, yet I continue to find an indescribable freedom in replacing what is false with the Truth of who I am in Christ. Release.

Still, there was an another battle waging war in my heart. And that’s the one that really “spanked” me the most. I hit the 2 year mark of my grief last March and this sense of entitlement encroached. Can’t I be happy now? Haven’t I grieved enough? I don’t want to be sad anymore. Can’t I take control of the reins of my life? Haven’t I earned that? I mean, culture would just wanna find a big bow to tie on my story and send me on my way. There were so many days I wanted that too.

So about halfway through the year, this hit me: “It’s hard to surrender to what I can’t see.” So go the lyrics to yet another song that was a big part of my year, “Whatever You’re Doing” by Sanctus Real.

Surrender. God was calling me to surrender without seeing what’s ahead. He was calling me to release my story, my future, my hopes and dreams, whether happy or sad, to Him…to the One who sees. Because He sees the bigger picture, the greater impact of my life fully surrendered to Him. I slowly opened my hands and my heart, and He used me in spite of my fear, my apprehension, my days when I told him bluntly that “I didn’t sign up for this.” He’s so good like that. And the ways He’s intersected my story with the lives of others over the past year, it’s been nothing short of a beautiful collision.

And that, that, is what gives me the strength, the hope, the peace, to raise my white flag, to raise my banner, tattered and torn, to my great God to use for His Glory.
Release.
Dearly loved, with open hands,
Melissa

4 thoughts on “A Weary Widow & A White Flag”