I took a marble with me to Spain. Yes, these were the precious marbles in the jar Tony gave me when we were engaged so that we could throw one away every year on our anniversary. That jar accidentally broke about 6 months back, and instead of scrambling to glue it back together or buy another jar, I simply accounted for all of the marbles and placed them in a temporary location…a Ziploc bag.

A few weeks before we left for our mission trip in Spain, our co-leader Carolyn asked each of us to bring a small item from home to share with our team as a way to get to know each other. I thought, and I thought. Of course I wanted to take Ralphy. But, then the most perfect thing hit me…I was to take one of my marbles on the retreat and then was to take that same marble to Spain.
And, I was to leave it there.
No, it’s not yet Tony’s and my anniversary. But the day I witnessed my jar shatter, I made a choice to let those marbles go…and do so by releasing one at a time in places or with people important to our life together.
Spain was one of those places. To be honest, I was so nervous about how I would feel as I walked into a country Tony and I dreamed of experiencing together.
Bittersweet.
I quickly fell in love with the culture, the history, the people. Tony would have done the same. I could see us living here while he pursued a degree; I could see us falling more in love with each other as we shared amazing times together in such a breath-taking place; I could see God using us for His Glory in a country so beautiful yet so empty without Jesus.
I missed him. I longed for him. I could feel the weight of grief again on my shoulders. I felt heart-broken all over again.
Yet I did not feel alone; I was so glad to be alongside my amazing teammates and new amigos who already feel like family. It’s as if Tony was smiling down on me, as I tried to relay to him, “Do you see me, aren’t you proud of me; I’m finally in OUR Spain.” 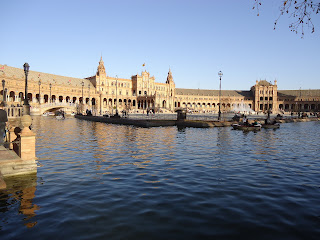 I had determined to find just the perfect spot to leave the marble; I asked the Lord to show me at just the right time. It’s been such a battle to have an undivided heart between wanting to dwell on Tony and wanting to be fully present for my team.
I had hoped I could release it sooner than later, so that I could focus on our mission as much as possible. And on day two of our trip, that hope was fulfilled as we visited the Plaza de Espana in the center of Sevilla. 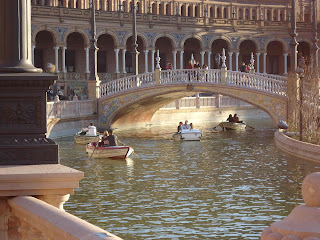 As we walked up on it, I was enraptured by it’s beauty, like none I’ve seen. It was so old, yet so well preserved. It was the essence of Spain, people everywhere. We walked around, taking photos galore. But what caught my eye were the couples rowing in small boats in the canal in the center of the plaza. I couldn’t help but picture Tony and I in one of those boats. Romance.

So, I stepped aside from the rest of the group. I reached into my purse and took out that precious marble. I held it up in my hand for one final picture, well two. 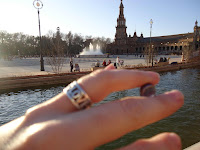 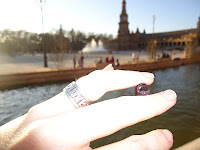 Toss.
The marble was gone, never to be seen again. Tony and my dream of Spain together gone with it.
It’s just another part of letting go. 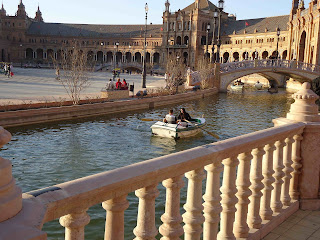 As I walked away to rejoin our group, I looked back to see this couple rowing by.

Love stories continue. Yes, mine with Tony on this earth has ended. Yet, others go on; perhaps even one for me will blossom again. Perhaps.
Whether or not that happens, I rest in God’s love story, the great Love of my life, and I pray someday, somehow the great Love of many in Spain. And so my prayer for Spain is captured so well in the words to “How He Loves” in Spanish, sung by Seth Condrey who will be here on Friday for our concert.
Dearly loved, with 72 marbles left,
Melissa