I’m a little behind on some of my blog posts. Some have been sitting as half-finished drafts for months now.   Blame it on lack of inspiration, blame it on busyness, blame it on grief that literally exhausts me often, if not constantly, oh and blame it on my super cute new puppy (more on her later).  I will just go ahead and forgive myself.

So journey back with me a few months to my wedding anniversary on April 26.  On what would have been a celebration of 3 years of marriage, I threw away another marble from my jar that Tony gave me when he proposed.  There’s now 73 left.  If I live to throw all of them out, I will be 104.  I told the good Lord I was okay with that as long as I could keep my teeth.  I’m well on my way – I finally had a cavity-free visit to the dentist!  That’s a major accomplishment.

Looking back at my post a few days before my anniversary, I wrote about getting lost in the sea of God’s love.  And that’s exactly where I journeyed, all the way to the ocean and back.

I met with my Jesus there.

I was joined by one of my best friends, Karen, such a fun friend to have alongside on road trips.  I heart her!  My biggest concern for the trip was to just escape life for a few days and relax.  I made it my goal to “unplug” from technology as best I could.  With Karen’s gentle encouragement, I succeeded, somewhat.

It was the day after Easter when we arrived at the beach.  We stayed in a high rise hotel with a view overlooking the beach and the ocean.  It was perfect.

But what was beyond perfect, a message just for me, was what was spelled out with dried up seaweed on the shore.  It said “He is risen.”

I stared for hours at the enormity of that sea, at how small I am compared to how large God is.  I wept, I laughed, I dreamed of memories spent by the ocean with my husband, I breathed that ocean air in, and I invited God to restore me.  I reflected on an entire year I survived, I lived through without Tony, a year I never imagined possible.  And I thanked my Jesus for never leaving my side.

He deserves all the credit, all the Glory, forever and ever.

It came time to toss that marble symbolizing what would have been year number 3 of our marriage into the ocean.  Karen accompanied me; I could not bear to do this task I was dreading alone.  I didn’t want to let go of that marble, that year, because it represented a year apart from the love of my life.  It’s a year I will never get back.  It represented the beginning of year after year of time passing between us.  Like the unceasing roll of the ocean tide, time moves on, and I’m forced to move with it.  I’m forced to move forward, time is relentless and unforgiving that way. 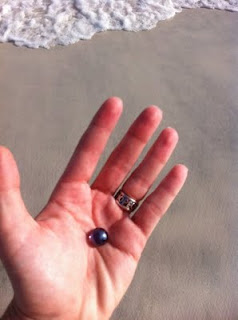 And it was that tide that took away that marble.  I took this picture, tossed the marble into the waves, and then it was gone…forever.

Yet, I was not without hope, for that ocean also represents the unceasing, unfailing love of my Savior.  I can’t think of a better place for my marble to be.

Now I’m 3 months in to living out marble number 4, and I’m shooting for it to be another cavity free year!

2 thoughts on “A marble in the ocean”